In a previous article I looked at the number of goals and expected goals Spurs players accrued last season. As you would expect, Harry Kane is easily the main goal threat. But which players create these chances?

Assists provide a simple way to investigate this. Below are the Spurs players with assists from last season. I have included the number of assists per 90 minutes of play. 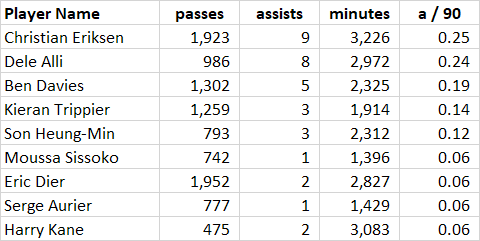 Note: I have omitted players with fewer than 1,000 minutes play.

As you might expect Christian Erisken is top, with Dele Alli close behind. Next come the full backs, who play an important part in creating chances in Pochettino’s attack.

There are several problems with judging players on assists – mainly the fact that whether a great pass becomes an assist or not is very dependent on the player who receives the ball.

One way of mitigating these issues is to use expected assists (xA). The concept is broadly similar to expected goals, however all completed passes are considered and each is assigned a value based on the likelihood that it will lead to a score.

Here are the top ten players in the Premier League last season by expected assists per 90 minutes. 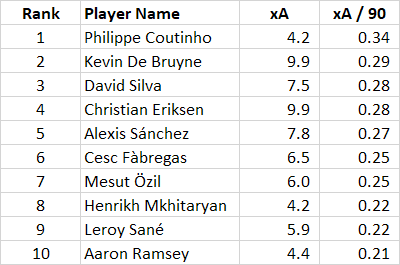 Note: only including players with more than 1,000 minutes of play.

These results are as you might expect. All the main creative passers are here – De Bruyne, Silva, Fabregas, Ozil. You can see why Barcelona spent so much money to secure the services of Philippe Coutinho!

The only Spurs player to feature is Eriksen.

But how did the other Spurs player perform? 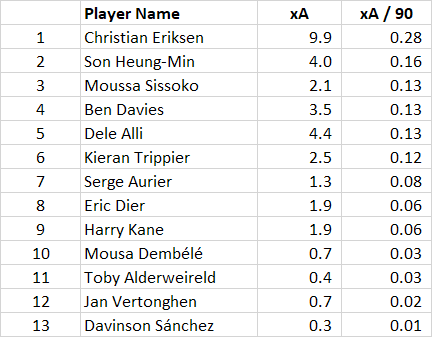 Note: as before I have only considered players with more than 1,000 minutes.

Christian Eriksen stands head and shoulders above the other Tottenham players in terms of expected assists per 90 minutes. The Dane is the key creative passer in Pochettino’s attack.

Son Heung-Min is next. The Korean cemented his place in the starting line-up this season with some excellent performances.

Then come the other attacking midfield players and the fullbacks. The one big surprise is Moussa Sissoko!

Creating goals isn’t really Mousa Dembele’s job, but this statistic does demonstrate his often criticised failure to use his considerable talent in more forward areas.

Finally a quick note on the players who I left out because they hadn’t played enough minutes. While these numbers should be viewed with caution – there isn’t enough data to be meaningful – it does suggest that with a fit Lamela, and Lucas Moura better integrated into the squad, Tottenham should have more back-up in the attacking midfield department next season. It also provides a tantalising glimpse of the potential of Kyle Walker-Peters.

Note: All models are my own, but they have been inspired by articles I have read on sites such as StatsBomb