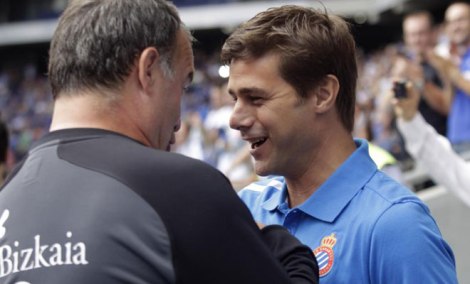 Mauricio Pochettino is the current favourite to be named the next Spurs manager. The Argentine coach has been heavily influenced by his compatriot Marcelo Bielsa – the legendary tactician behind Chile’s wonderful football at the last World Cup and Athletic Bilbao’s destruction of Manchester United in 2012. Pochettino’s time as a player and manager at Espanyol, the “other” team in Barcelona, has also had a part to play in developing his footballing philosophy.

So, what style do his teams play?

END_OF_DOCUMENT_TOKEN_TO_BE_REPLACED

Tim Sherwood has been pushing his credentials as Spurs manager again. With all the signs pointing to a summer exit, this may be more an attempt to tout himself for other jobs rather than to keep hold of his current position. A minority of fans have taken up his cause, seizing on  END_OF_DOCUMENT_TOKEN_TO_BE_REPLACED