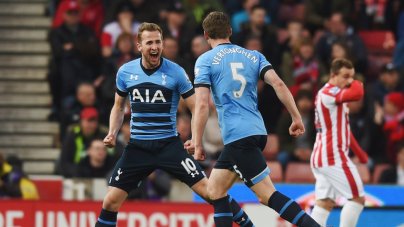 As the Premier League season builds to a climax, Mauricio Pochettino’s Tottenham side are peaking at just the right time. It’s hard to remember two more impressive performances than the clinical way in which we dispatched Manchester United and Stoke City – two teams who certainly had the potential to derail our title push.

These games have also cleared up any doubt, if any remained, that Pochettino has found his best eleven, and that that eleven have become very comfortable playing with each other. It was hard to pick a man of the match, as every player played their part. Each knows his job and there is an almost instinctive understanding of where teammates are and what they plan to do next.

In Harry Kane we have a prolific, incisive forward, always able to create the yard of space he needs to get a shot away, but he is ably supported by plenty of goal threat from those behind him. Alli, Erisken and Lamela’s fluid movement and quick passing opens up the stubbornest of defences.

Dembele and Dier overpower the opposition in midfield. Walker and Rose’s endless energy gives us the width we missed earlier in Pochettino’s reign. Vertoghen and Alderweireld have a mutual understanding and the pace to play the high line. Lloris is a great shot stopper but more importantly a proactive keeper, not one who sits back for fear of making an error.

The statistics back this up. In both games Spurs comfortably out-shot their opponents: 16-5 and 23-12.

It might be a little late to take the title from Leicester but at least we’ve put the pressure on. Spurs have scored the most goals and have conceded the fewest. We have the top goalscorer in the division, the stand out defender (Alderweireld) and the best young player (Dele Alli). If we do pip Leicester at the post – and the midlands club must still be favourites – nobody can say it won’t have been deserved.

Were these Spurs’ best performances of the season? Can Pochettino’s men still win the title?  Please leave your thoughts in the comments section below.