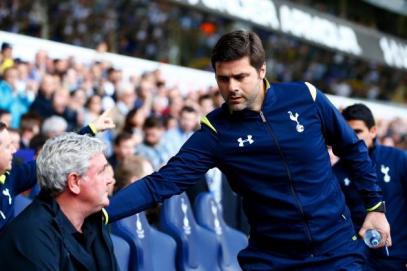 Two second half goals made it a winning finish to football at White Hart Lane this season but this game was more of a quiet whimper than a rousing finale.

Mauricio Pochettino is nothing if not consistent. Here he went with the same 4-2-3-1 formation he has used pretty much all season, while the only change from the team that lost to Stoke was the expected return of Danny Rose from injury.

His substititions were more interesting. We got to see a good half hour from Mousa Dembele, on for the clearly tiring Eriksen. There was even a rare sighting of summer signing Benjamin Stambouli; the Frenchman only got a ten minute cameo.

This wasn’t a great performance from Tottenham. A drab first half looked very much like a meaningless end of season dead rubber – except of course for Hull it was anything but. Steve Bruce’s team have been poor for much of the campaign, despite some high profile buys. Former Tottenham men Tom Huddlestone and Jake Livermore have shown why Spurs were keen to sell them.

In the opening moments Dier missed with a free header from a corner, delivered on a plate by the excellent Erik Lamela. However it was Hull who made the early running.

Nikica Jelavic had several opportunities. First missing with a header after a poor clearance by Fazio had put Spurs on the back foot. Then he hit the woodwork from close range after Bentaleb had been robbed of possession on the halfway line – Dier’s ineffectual attempt at a clearing header presenting the Croatian with the chance.

Both were created by crosses from the Spurs left. Hull were having lots of joy down that side. 43% of their attacks came on their right wing, as opposed to 30% on the other side.

It wasn’t all one way traffic. Harry Kane drove the ball across the six yard box after some good work from Eriksen. Then Lamela went close after Mason set him up.

Lamela has been growing in confidence of late. After a promising start to the season, he seemed to have lost his way but here he was Tottenham’s stand out performer. It was his clever pass that finally unlocked the Hull defence. Chadli’s run and finish were of a similarly high standard, at odds with the mediocrity up to that point.

One thing Spurs have been missing under Pochettino is the key to breaking teams down in the final third. A look at the shot location statistics makes rather uncomfortable reading. Tottenham don’t make many chances in the danger zone.

After waiting an hour – some might say several games – for an incisive move, it only took seven minutes for the next one to come along. As if inspired by Lamela’s inventiveness, Ryan Mason and Danny Rose combined for a lovely one two. Mason chipped over the Hull defence for Rose to volley home.

The young midfielder has taken some stick recently and the defensive side of his game has possibly merited it. He came through the youth ranks as a more attacking player and here he showed that creative side to his game.

There was still time for a goal mouth scramble in the Spurs penalty box where Hull contrived to waste five good chances in a row. Bruce had his head in his hands, relegation looming, contemplating another lost three points.

Was this a good Spurs performance? Did Lamela stand out? Let me know your thoughts in the comments below.