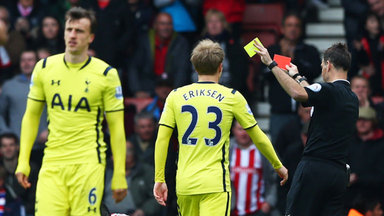 From this performance, it looks like Pochettino really doesn’t want to be in the Europa League.

Spurs’ form has collapsed in recent weeks. One win in six tells its own story – even that was against Newcastle so it doesn’t really count.

We acquitted ourselves quite well against City last week but apart from that the football has been depressingly poor. After playing more games than any other Premier League side this term, fatigue has set in. As a supporter I’m feeling it too.

This loss to Mark Hughes’ team – a side I’m not particularly fond of for a number of reasons – was a new low point. This was no fluke result. While Spurs took 55% of the possession, Stoke won the shot count 17 to 9.

There were some extenuating circumstances. Injuries to Rose, Davies and Walker have left Pochettino struggling to find fullbacks. Dier was found out here by the lively Arnautovic. Serious thought needs to be given to bringing in more cover at right back in the summer.

Chiriches gave his usual display – part class, part slapstick. This fixture had produced six red cards in the last six meetings. Once the Romanian was on a yellow and looking vulnerable, there was little doubt that that record would be added to.

Even Lloris has looked out of sorts since the horrible injury he sustained after colliding with Kyle Walker against Leicester. He was arguably at fault for two of the Stoke goals.

Pochettino has demonstrated a stubborn streak in his team selections, nowhere more so than in central midfield. A tired looking Bentaleb and Mason have been denied a rest, despite the presence of Stambouli, Paulinho and Dembele waiting in the wings.

The first goal stemmed from a poor header in midfield by Bentaleb. Chiriches let Diouf put in a dangerous cross. Vertonghen missed the chance to clear, leaving Charlie Adam free to head home. As usual Mason was hanging around in the vicinity of Adam without actually tracking him. His inexperience in a defensive midfield role looks more obvious by the week.

The second came from a terrible mix-up between Lloris and Dier, presenting N’Zonzi with a simple chance to score.

Soon after Adam almost added to his tally. Lloris pushed the Stoke midfielder’s effort wide after he had been allowed to run from the halfway line almost unchallenged.

Kane and Eriksen, so often our saviours earlier in the season, were kept very quiet. At 2-0 there was a flash of inspiration as a one-two between the pair almost put Kane in. The move was notable for its rarity in a match where Tottenham were mainly reduced to shooting from distance.

The final goal summed up our problems at the back. Arnautovic easily beat Dier to the byline. His low cross was turned in at the neat post by Diouf, the ball somehow sneaking past Vertonghen and Lloris. It put the seal on a chastening defeat.

Up until now the season has gone fairly well, considering it’s Pochettino’s first. A cup final day out, famous wins against Chelsea and Arsenal, identifying a core of players who can be trusted, the emergence of Harry Kane. Most supporters were realistic enough to realise fourth place was a long-shot. Nevertheless, the end to the season is leaving a sour taste in the mouth.

Roll on the summer.

What went wrong for Spurs at Stoke? Should Pochettino give some other players a chance? Let me know your thoughts in the comments below.