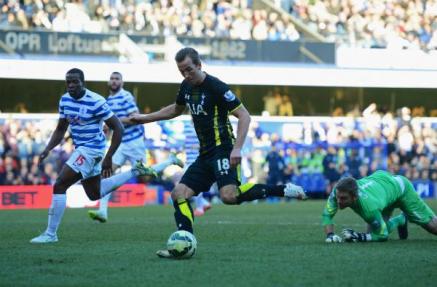 Two wins in four days and Spurs’ top four hopes are back on track. Now just four points off third place it’s a real possibility, even if the form of Liverpool and Arsenal make those two favourites.

Mirroring the midweek victory against Swansea, this game felt comfortable after Spurs had secured a two goal cushion, then a late strike caused panic and in the end we came perilously close to throwing the three points away. Surprisingly this was much more of a contest than the game against Swansea. Chris Ramsey can take heart from his side’s performance.

The home side started the stronger, former Spur Bobby Zamora almost scoring with a looping header as early as the first minute.

QPR had one simple but devastatingly effective tactic. Their midfielders were playing it high and long. Either over our defenders for Charlie Austin to run on to, or up to Bobby Zamora to compete for and generally make a nuisance of himself. The Spurs defence were exposed time and time again but it wasn’t really their fault. If you play a high line you have to put pressure on the ball in midfield and Tottenham just weren’t doing that, at least not in the first half.

QPR created several opportunities, the best of them falling to Austin who struck a venomous shot against the underside of the bar, after some neat passing outfoxed Dier and Vertonghen.

Somewhat against the run of play, it was Tottenham who opened the scoring, through the prolific Harry Kane. Not content with heading home the freekick, the Spurs striker also earned it through a typical piece of direct running. It was a good header but Rob Green made it a lot easier, making a pathetic attempt to intercept the high ball.

After half time, Spurs improved and had several chances to increase their lead. A Kyle Walker shot almost deflected in off Mason. Eriksen showed his accuracy from range with an effort that thudded against the post, Kane snatched at the rebound. Caulker let in Townsend who blazed over. Walker almost scored again after a lovely through ball from Kane, this time Austin cleared Eriksen’s follow up off the line.

The second Spurs goal came ironically from a ball over the top. Mason played a lovely lofted pass leaving Harry Kane and Nacer Chadli both through on goal. It was a carbon copy of Soldado’s chance against Napoli but where the Spaniard faltered, Kane was decisive. First he motioned Chadli to stay apart from him, providing the decoy. Then he rounded the keeper and calmly rolled the ball home.

Not for long as a 75th minute Sandro strike meant we were in for a nervous finish. There was a shout for a penalty as the ball struck Bentaleb’s arm. It was ball to hand but arguably the Spurs player’s arms were in an unnatural position. Fortunately it wasn’t given and we held on to move within striking distance of the promised land.

Did Spurs deserve the win? Can we finish in the top four? Let me know your opinions in the comments below.