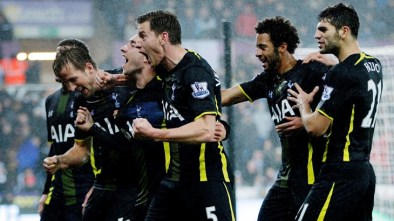 Haven’t we been here before? A last minute winner after a poor performance and Spurs grab the three points?

On the positive side we showed some character. Our defence withstood the barrage. We kept fighting for the win. On the negative side a healthy dose of luck is hiding some deep rooted problems.

Spurs began the game well. The passing was nice, the attitude was positive. Most promising of all, we were pressing Swansea, denying them the time and space their short passing game needs and it didn’t take long to make our advantage count.

On four minutes Tottenham won a corner. Eriksen’s cross beat the first man for a change and Kane, rising early to get above the Swansea defenders, headed the ball into the net. An early goal, from a corner – things were looking up.

We didn’t remain in the ascendency for long. The first warning signs came in the 20th minute as Bony got in between the Tottenham centre backs. Ben Davies made a fantastic goal saving challenge. The left back is one of the success stories of late.

As the game progressed, this became the pattern. Swansea were now on top, our early pressure having dissipated. Bony kept getting between Fazio and Vertonghen and it was only a combination of wasteful finishing and Hugo Lloris that kept him from scoring.

If Pochettino had to do anything at half time, it was surely to implore his centre backs to get tighter to Bony. If he did, it fell on deaf ears – the big Ivorian was in on goal again within minutes of the restart, this time he made it count.

Swansea had been on top at the end of the first half, after the goal they were totally dominant. Crisp purposeful passing cut through our midfield. Montero and Routledge were excellent on the wings.

Intense, aggressive pressing won the ball back as soon as Spurs fleetingly won possession. We couldn’t get out of our half, the pressure was relentless yet the defence held firm.

Mason and Bentaleb have been a revelation in the centre. They controlled the game against Everton. However, here they were overrun, maybe their inexperience finally caught up with them?

Every time we won the possession, we’d lose it in midfield because of the pressure Swansea were putting us under. We were crying out for someone with the strength to hold onto the ball. Dembele, who entered the fray in the 56th minute, was the perfect man for the job.

I have recently bemoaned the Belgian’s lack of intensity and end product. Here that didn’t matter. His power in the centre helped wrestle back some control of a game that had spiralled out of our control. Stambouli, who came on 15 minutes later, complemented him, adding some dynamism and bite.

The final ten minutes were much improved and the winner was created by three players who came out of this game well. Harry Kane put in a man of the match performance, harrying the opposition, his work-rate was phenomenal. Here he boxed in Ashley Richards on his own goal line, causing him to hit a rushed clearance.

Ben Davies had pushed up from left back where he performed admirably all game. He picked up the lose ball and crucially immediately fed Eriksen, before the defenders had time to set themselves.

The Dane has been inconsistent this season but he has that magic ability to change games. He twisted to get room for the shot and hit a low drive into the near corner, sparking ecstatic scenes that belie the contention that the players don’t care.

As for how we treat this victory? The Europa League is finished for a while, Pochettino has some time with the squad without unwanted distractions. The transfer window is almost upon us. The problems can wait for another day. I’m just going to enjoy a fantastic last minute win.

What did you think of Spurs performance? Were they lucky to win? Let me know your opinions in the comments below.