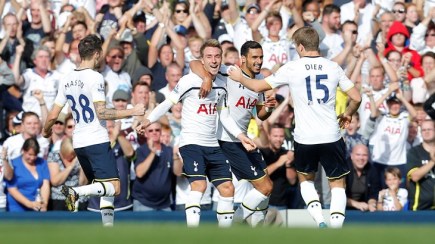 It wasn’t a vintage performance, and Southampton should have equalised as time expired, but here was a first win in five league games from a much improved Tottenham side.

The high energy pressing from the QPR game was back, as was the quick one touch passing. It didn’t always come off and in the second half Pochettino’s men sat further and further back, inviting Southampton to attack, but this was a far better performance than either of our last two home games. Especially considering the opposition.

Southampton came into the game on the back of four straight wins in the league, lifting them to second place, and making a mockery of the media’s pre-season predictions of trouble on the south coast. The pre-match odds surprisingly made Tottenham slight favourites but getting any sort of win over a team in such impressive form must be seen as an achievement.

From the start it was a battle of two sides intent on making life difficult for their opponents, harrying them high up the pitch. This led to a game somewhat lacking in coherence and quality as neither team had the chance to build an attack. The main opportunities came on the break.

This Spurs’ team seems much happier playing that way, especially Erik Lamela who looks to be in his element gliding through a broken field on the counter attack. Both him and Christian Eriksen had early chances to shoot from distance that were scrambled away by Forster. Southampton didn’t heed the warnings.

The breakthrough arrived in similar fashion just before half-time. Adebayor took possession out wide on the left and passed it inside. Chadli flicked it on to Eriksen, who hit a low powerful shot into the bottom corner of Forster’s net.

After the goal, Tottenham had several good chances on the break as their opponents were forced to come forward more. Chadli was unlucky to see his shot strike the inside of the post after a slick counter attack. Still more moves broke down because of errant passing, reminding us all that this team is still a work in progress.

The Spurs defence was much better than in midweek but there were some moments where a lack of concentration let them down. The captaincy seems to have given Kaboul a boost of confidence, at times he looked backed to his imperious best. He still managed to throw in his customary mistake, a wild clearance that set up Wanyama for a shot that Lloris did well to parry.

Southampton huffed and puffed without causing too many scares, the Tottenham centre backs doing particularly well to subdue the dangerous Graziano Pelle. However, in the final minutes came a glorious chance for an equaliser. The ball was whipped across goal by Bertrand finding Sadio Mane, a matter of yards from goal. The otherwise excellent wide man, inexplicably missed his kick when it seemed inevitable he would score.

After a communal sigh of relief, Spurs held on for a vital three points. After recent setbacks this was a key win. Coming as it did, against a possible league rival and Pochettino’s former team, doubly so.

Were you happy with the Spurs performance? Should Southampton have got something from the game? Let me know in the comments below.

5 thoughts on “Spurs 1 Southampton 0 – Pochettino back on track”