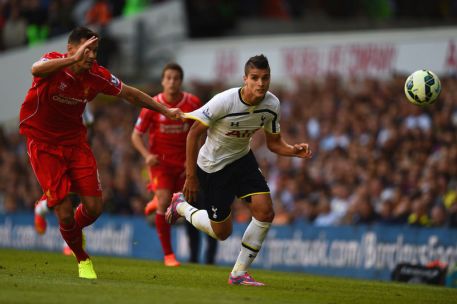 Erik Lamela has had a great start to the season, finally delivering on the promise that saw Spurs pay a club record £30 Million for his services. He was arguably the man of the match in our demolition of QPR, changed the game in Tottenham’s favour with two assists when he came on as a substitute against AEL Limassol and even scored a wonderful goal against World Champions Germany, when called up by Argentina on Friday. A far cry from his injury hit performances last season.

However, amongst the positives there has been one disappointment, Tottenham’s chastening defeat at the hands of Liverpool. It would be wrong to single Lamela out – most of the team were poor, Kaboul and Rose spring to mind. However, the young midfielder was particularly ineffective. No shots, no key passes, no tackles, the lowest passing success rate of all outfield players – he didn’t have a great game.

To be fair to him, he didn’t hide, he kept trying to make something happen. With 84 touches, he was second only to Ettiene Capoue in terms of involvement in the match. It just wasn’t his day, but why?

Of course this early in the season, four games into his rebooted Spurs career, at just 22 years of age, we can’t expect Lamela to be man of the match every game. Equally, it’s hard to play well when the opposition are on top and your teammates aren’t helping. However, Rodger’s tactics were key in keeping the Argentine quiet.

After Spurs demolition of QPR, Liverpool came to White Hart Lane with a clear plan to stop us breaking at speed and specifically to stop Lamela. They carried it out to perfection.

Where QPR gave us all the space we could ask for, Liverpool were the complete opposite. Their pressing and tackling was incredible. Last season they topped the league in tackles won. Here they beat us 28 to 17.

They particularly targeted Lamela, especially when we had an opportunity to break. The second he got clear in midfield an opposition player was on him, slowing him down and putting him off his stride. Often this would involve subtle, niggly fouls; small pushes and pulls checking his runs, putting him off balance. It was a clever tactic and many times the referee let these go.

Lamela was still the most fouled player on the pitch. This graphic, from the excellent FourFourTwo Stats Zone, shows how he was fouled almost exclusively in the middle third of the pitch. Before he could get into a dangerous area:

Click on the image to see full graphic on FourFourTwo site

Below is a table of the players who were dispossessed the most often in the match. Lamela is out in front by some distance:

The equivalent table for players fouled tells a similar story:

We can’t expect Lamela to be the man of the match every time he puts on a Spurs shirt. It is a sign of his progress this season that he was singled out for special attention.

Liverpool are a very good team and probably the best in the league at executing this kind of plan. Let’s hope other teams don’t learn from this game and manage to successfully copy Rodger’s tactics.

Does Lamela need to prove himself against a top side? Let me know in the comments below.