Last week Spurs were at table toppers Liverpool, this Monday sees us host bottom of the division Sunderland. This begins a run-in of six very winnable games. If Tottenham could have stayed within striking distance of fourth place, we would have given ourselves a great chance. As it is, we’re left wondering what could have been.

Sunderland are one of the few clubs who have had an even more turbulent season than us. They too have sacked their manager – results have remained poor and now they face the stark reality of relegation. They currently sit seven points off safety, albeit with games in hand. They are by no means mathematically down, but with Fulham and West Brom having already won this weekend, and games running out, they need to start picking up points.

The black cats are currently on a three match losing streak, having not won in the league in six. In fact, their last win was in the North-East derby, where a comprehensive 3-0 away win at arch rivals Newcastle gave Sunderland fans hope – subsequently proved to have been unfounded.

Gus Poyet, the former Spurs favourite, is their current manager, after taking over following the brief, unconventional reign of Paulo di Canio. Initially the Uruguayan looked to have turned round their fortunes. Sunderland had an early spell where they won three out of four games, including victories over Newcastle, Southampton and Manchester City. Since then Poyet has been less successful, although he did take them to Wembley, where they were losing League Cup finalists.

Sunderland have the dubious distinction of having had the most players sent off in the Premier League this season, a total of seven (next worse are West Ham with five). They tend to attack down the left hand side and favour long shots (maybe because they don’t have the quality to create better chances). They also use a disproportionate number of long balls, although they are hardly the worst in the league in this respect.

The wear-siders have used 4-1-4-1 and 4-3-3 a lot this term, but have gone with an unorthodox 3-4-1-2 in their last two games. They have lost both, although only by the odd goal, and certainly put in a more accomplished performance against Liverpool than Tottenham did. Marcos Alonso at left back, who came in on loan in January from Fiorentina, has looked promising. As has a rejuvenated Adam Johnson, who is top both for goals scored (8) and assists (4). Phil Bardsley has impressed at left back, after being frozen out by previous coach, di Canio.

Sunderland will be missing senior striker, Steven Fletcher. Fabio Borini and Conor Wikham should fill in. For Spurs, Soldado and Vertonghen picked up injuries in last weekends dispiriting loss at Anfield. They join long term absentees, Lamela, Capoue and Walker. The good news is both Adebayor and Chiriches are in contention, the Romanian came through 90 minutes in the under 21s fantastic victory over Arsenal a week ago.

All Tottenham have to play for now is league position and a place in the Europa League. Some would rather we missed out on qualification for what is very much Europe’s second best competition, citing Liverpool’s strong season as an example of how the lack of distraction can be a positive. I’m ambivalent, but with a place in the Champion’s League on offer to next years winner, would on balance prefer to be in it. From a pride point of view, it is important we finish the season strongly and get as high a league position as possible.

If properly fit, I would bring Chiriches straight back into the eleven. Before injury he looked one of our more promising summer signings. I would bring Eriksen into the centre – I’m starting to feel like a broken record on this point. There I would pair him with Sigurdsson to add more creativity and to press the opposition. Sandro would be the defensive shield, to give those two freedom to get forward. I really think Rose is a weak link in the Tottenham team, so would play Fryers.

Here’s my team for the game: 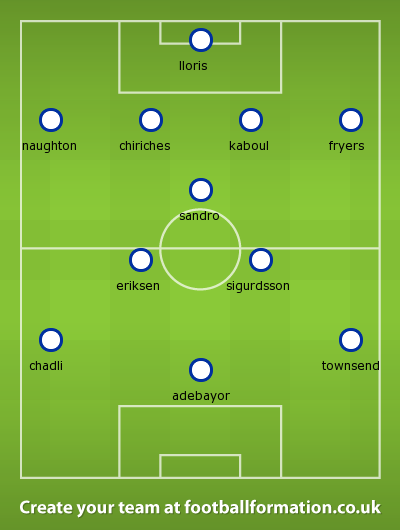 Do you agree with my team? Please leave your thoughts in the comments section below.

Read my post: Tottenham’s Season in 10 Charts and Graphs