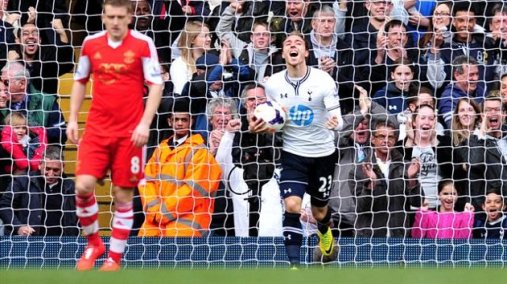 Football is supposed to be fun, and for the first time in a while, it was again at the Lane. My five previous visits this year had included thrashings by West Ham and Liverpool, the lone victory a drab win against Cardiff. Here we saw a proper roller-coaster of a game. Five goals, a glorious comeback and a dramatic late winner – what more could you ask for?

The day didn’t start so well. First came the news that Adebayor was still injured. I’d assumed that he had missed the midweek trip to Portugal as a precaution, but I was wrong. The spearhead of our attack, the positive symbol of Sherwood’s regime, was out. Could Soldado, missing in the league since his cathartic goal against Cardiff, fill the gap?

Sandro, another talismanic figure, was also injured. Otherwise we named an unchanged side from the Arsenal game, and a similar formation, 4-2-3-1. Chadli was at number 10, after his coming-of-age performance in Lisbon. Eriksen and Lennon supplemented the attack. Bentaleb was there to keep the ball moving in midfield. Vertonghen and Kaboul continued their successful partnership in the centre of defence. After a season of flux, not least on the team-sheet, the continuity was welcome. How can you build a team and an identity with constant change?

The game started reasonably positively, with Tottenham moving the ball around well. However, there was a unnerving feeling of deja-vu from last week, as Southampton looked to press and break as we kept a dangerously high defensive line. With little pressure on the ball, the visitors got behind our backline on several occasions. Then came the hammer blow, a Southampton goal.

The most worrying thing was the simplicity with which they breached the Spurs rearguard. The Southampton keeper launched a goal kick down-field, Naughton came forward to clear but he misjudged the bounce. The ball sailed over his head to Rodriguez. Through on goal, he took one touch to set himself, before clinically placing the ball into the corner of the net. Naughton held his head in his hands. Little did he know, his day was about to get even worse.

The second came just minutes later. The ball was flicked over the Tottenham defence but Naughton was on hand to cover. Rather than clear the ball, he stabbed it ineffectually straight to the waiting Lambert, who showed some nice footwork to put Lallana clear. He calmly slotted the ball under the onrushing Lloris. With only half an hour played, it felt like the knock-out blow.

Then, as in the comeback against Dnipro, Christian Eriksen dragged us back into the match. After good work on the right by Chadli, Naughton swung in a cross. The ball cleared Soldado, and Eriksen was on hand to drill home from close range.

Eriksen had a fantastic game, he seemed to be everywhere and involved in everything. The sort of individual performance that makes you excited for the future. Not since Bale, has a Spurs’ player demonstrated such ability to turn a game, and if anything Eriksen could be more valuable. Bale’s performances were always very individual in nature, clearly separate from the prosaic nature of the rest of the squad. The Dane is more inclusive – he doesn’t play well in spite of the team, he makes the team play well.

On this occasion Soldado ably assisted him; no goal but plenty of nice touches and clever passes. Just after the break the two combined for the equaliser. The Spaniard won a tussle on the right and pulled the ball across goal for Eriksen to tap home.

The excitement in the ground was tangible. Surely now we must find a winner. There was a tense wait, but finally it came, deep into injury time. Eriksen was inevitably involved again. This time he tapped a pass across to Sigurdsson, who powered the ball from distance into the visitors net, sparking wild celebrations.

We may be out of the Europa League, with only a mathematical chance of fourth spot in the Premier League, but at last life was fun again at the Lane.

Do you agree? Please leave your thoughts in the comments section below.