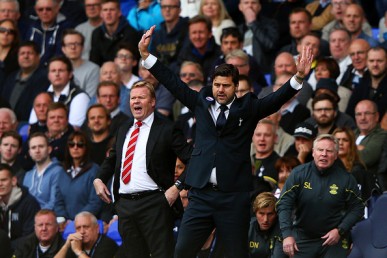 Mauricio Pochettino faces his old side this Saturday as Spurs travel to Southampton for the early kick-off.

The south coast side have been one of the more interesting stories of the season. Seemingly in crisis before they had even played a game, they now sit seventh, only recently having fallen away from the race for the Champions League places. With Spurs in sixth, there is one place and one point between the teams.

Pochettino’s Southampton finished eighth last term. Koeman’s side look certain to better this at least by one, while fifth place is still only a point away.

So how does Koeman’s team differ from his predecessor’s? 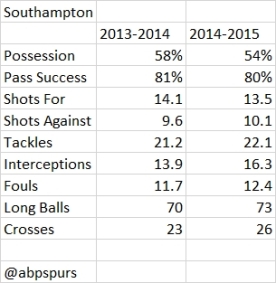 Pochettino’s side had more possession, while Koeman’s make more interceptions and crosses. Otherwise it seems not so much has changed at St. Mary’s. In fact it’s striking how close most of the numbers are.

Hugo Lloris faces a late fitness test to see if he can return to the side after his knee injury at Leicester. Kyle Walker has a foot problem and may be out for the rest of the season. They are Spurs’ only injury worries.

For Southampton, Filip Djuricic and Fraser Forster are both still out. Victor Wanyama, an important presence in the Saints midfield, is suspended.

One time Spurs target, Jay Rodriguez, is yet to feature this season. It’s very sad to see a player who had just made it into the England team suffer such a long term absence.

Tottenham have been drifting of late, as if the season is already over. The scoreless draw against Burnley and the home loss to Aston Villa demonstrate that it’s often better to avoid teams with a lot still to play for at this time of the season.

While the 3-1 victory at St. James Park was pleasing – especially for Harry Kane’s 30th goal of the campaign – it was against a team who barely seem to be going through the motions. Newcastle’s defending and commitment wouldn’t have looked out of place in a pre-season friendly.

As usual my worry is Spurs’ lack of width. Southampton’s young, fast fullbacks will frequently get forward and leave gaps but I wonder if we have the players to take advantage.

Do you think Spurs will beat Southampton? Who should Pochettino field? Let me know your thoughts in the comments below.