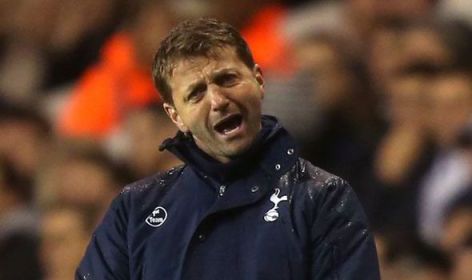 Tim Sherwood has given an interview where he talks about the way he is perceived and the pressure to get results.

Asked whether he thought he had got the recognition he deserved Sherwood replied:

“No, probably not. People have been waiting for us to fail and lose some games.”

His appointment does seem to have had a polarising effect on fans and the media alike. The roots of this discord can be traced back to the sacking of Harry Redknapp and the short reign of Andre Villas Boas. These very different characters have split supporters who have very different ideas on how the club should be managed.

Redknapp and Sherwood are British, old school former players. They give the impression of distrusting complicated tactics and portray a “man of the people” image. AVB is a foreign, modern, tactically sophisticated coach who never played the game at a high level. He had a more cerebral image and appeared slightly aloof.

Levy has flip-flopped from one completely different approach to the other, not treating any of these managers particularly well, and this has created bad feeling and bitterness.

“I don’t know. I just think the perception is you cannot be a rookie manager and come in and be that good.”

Whichever camp you sit in, one undeniable fact is that Sherwood has not managed a club before at any level. It’s difficult to find examples of other top six clubs appointing someone with no previous experience. He isn’t an idiot and he does seem to be learning, but do Spurs want a manager learning on the job? Would it not have made more sense for Sherwood to have started at a lower level before moving to a team near the top of the English football pyramid?

“I honestly believe I can be a good manager, but I am realistic enough to know that you don’t get given time,” Sherwood said.

Sherwood has an 18 month contract but the signs are this could well be terminated in the summer. There is an argument that he can’t win. If he misses out on fourth place, as seems likely, Levy will fire him. If he gets Champions League football, Levy will want a more experienced manager to oversee our European campaign. It is also quite possible that a successor (maybe Louis van Gaal) has already been chosen.

In my opinion Levy has always seen Sherwood as a caretaker manager. He was convinced by Tim to give him a permanent contract to give him more respect with the players – otherwise they would already have been thinking about next season. 12 months or so remaining, on what must be a relatively low wage, will not cost much in compensation.

“I think Liverpool is a good example. They gave Brendan time. Seventh last year and look at where he is now. It is a great example. And that team play football exactly how he wants them to play. But they had to take that step back.”

It is true that managers need time, especially those that want to build a team with a specific style. If you have a petrochemical billionaire chairman you can just buy the best players available, but teams like Spurs and Liverpool must try to differentiate themselves in other ways. The difference is Brendan Rodgers had four years experience and a track record at Swansea before he came to Liverpool. He also has a very clear plan and style he wants Liverpool to adopt.

With AVB there was a clear plan, though towards the end of his tenure it wasn’t working and he seemed to have lost the support of the players. So far, apart from a bit of mumbling about 4-4-2 and more goals, Sherwood’s Spurs don’t seem to have an obvious identity or a direction.

He must try to fashion one, while continuing to pick up points, all under the looming spectre of Levy’s knife. I feel quite sorry for him.

Read my Chelsea Preview – can we wend 24 year drought at the Bridge?

3 thoughts on “Tim Sherwood interview – should we feel sorry for rookie manager?”