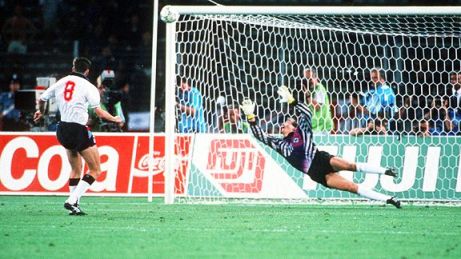 As there was no Spurs game this weekend, I found myself watching some of the Winter Olympics. The BBC were showing highlights of the USA versus Russia ice hockey game. The Americans and Russians obviously have a bit of history between them and the atmosphere in the Bolshoy Arena was electric. The game finished 2-2 after over-time and had to be settled by a penalty shootout.

I’m not the biggest fan of penalties when my team’s involved – just take a look at the name of this blog if you’re in any doubt about that – but as a neutral observer they do have a certain appeal. The excitement and tension is absorbing, the outcome of a game reduced to a handful of one-on-one battles – all very gladiatorial. In the end Russia ended up losing at home to their biggest rivals, a fate I recognise only too well. I empathised with the Russian crowd, it was a cruel way to lose.

So what’s my problem with penalties? Well as a Spurs and England fan, when it comes to shootouts I’m habitually on the losing side. There’s just something in our DNA, when extra time finishes and the scores are level we meekly capitulate.

It all began so promisingly. In 1984 Tottenham won the UEFA Cup final against Anderlecht in a penalty shootout after a 1-1 draw. Keeper, Tony Parks, saved the final kick from Arnor Gudjohnsen whose son Eidur would later represent Spurs. Unfortunately, I was too young at the time to appreciate it.

Our next shootout didn’t come for another 10 years. Victory again, but this time in less exhalted circumstances; a third round FA Cup replay against Peterborough United. But then the luck ran out.

For the following 20 years, encompassing seven shootouts, Tottenham would draw a blank. From the 1996 FA Cup loss to Nottingham Forest, to last season’s exit from the Europa League, we lost every single time. Probably the most painful came in the 2009 Carling Cup Final against Manchester United. United’s second choice keeper, Ben Foster, performed heroics after being shown our penalty takers’ previous kicks on an iPod behind the goal. Losing in a final, and missing out on a rare opportunity to win a trophy (even if it was only the League Cup) was a particularly hard pill to swallow.

The run was finally broken this season with a League Cup shootout victory over Hull City. By the next round we had sacked our manager, subsequently exiting meekly against West Ham. Hardly a victory to wipe the slate clean.

As for England, my first taste of shootout pain came in 1990 when we lost a World Cup semi-final to our eternal rivals, Germany. I can still remember the intense disappointment. We had outplayed the Germans over 120 minutes and come so close to reaching the final. I’d started to actually believe, only to have it snatched away as Chris Waddle sent the final spot-kick sailing over the bar.

We did beat Spain six years later in Euro 96, but this only delayed the agony as we went on to lose in the semi-finals again, on penalties again, to Germany again. This time the fact the game was at Wembley only intensified the misery.

We have since lost a further four shootouts without recording a victory. So that’s six losses from seven, five in a row, 18 years without a win. This includes losses at successive tournaments to the Portuguese, taking up the mantle from the Germans, England’s new bête noire. In fact, according to data from the Guardian, England have the worst shootout record of the major footballing nations:
​

It has got to the point where if a game goes to penalties, I just assume we’ll lose. When England ended up in a shootout with Italy during the last European Championship, I didn’t even feel that upset when we inevitably lost. I expected it, so it couldn’t hurt me.

So you can see why (a) I get very annoyed when anybody trots out the hackneyed cliche that penalties are a “lottery” and (b) I tend to hope for anything but penalties.