This was the third match I have attended this season. The other two were losses to Chelsea and Wigan, and I was beginning to think I was a bad luck charm. Thankfully I have finally seen Spurs get some points. 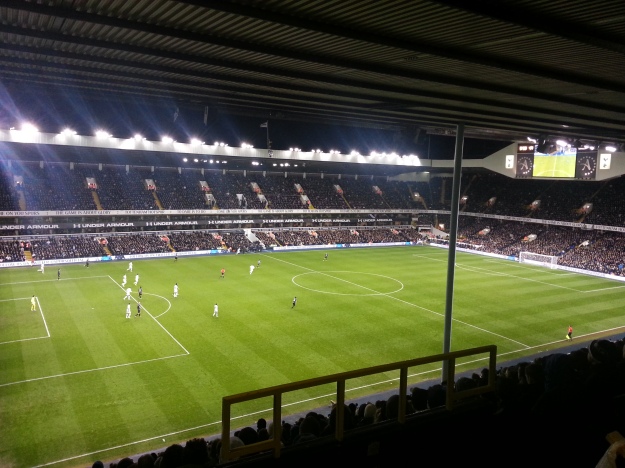 Here are my thoughts on the match:

As in many games this season we looked fantastic for half an hour, then struggled. This has happened frequently, Arsenal and Manchester United being two of the more prominent examples. We can’t play well for a whole match but we usually have a good spell; well apart from against Wigan. Is this a fitness issue? More likely it’s confidence. We lose our bottle, drop further back and resort to long balls. It starts to feel like you’re watching England.

Lloris finally seems to have secured the starting spot from Brad Friedel which can only be a good thing looking to the future. It’s sad for Friedel but at 41 he can’t be our long term option. One striking thing about Lloris is his confident and aggressive approach to coming off his line, both to mop up through balls and to deal with crosses. This is an important attribute, there is nothing worse than a keeper that makes flashy saves but hides on their line (Shay Given I’m looking at you). If done well it avoids giving away chances and gives defenders confidence which in turn feeds into the rest of the team.

There was an great example of this is in the previous game against West Ham. There was a key moment at 1-0 where Nolan was through. He crossed the ball to a West Ham player waiting for a tap in but Lloris was quick as a flash off his line to intercept the ball.

Unfortunately a goalkeeper of this type will make some mistakes and we almost paid for one in the first half here. Henderson missed an open goal after confusion between Lloris and Walker. These errors may make him unpopular with some fans and pundits but on balance I think he’s well worth it.

This was Dembele’s first start in six weeks. His injury has coincided with a drop in Spurs’ form. When Modric left we needed a new midfielder to drive our team. Dembele is nothing like the Croatian, he’s more of a powerful driving player in the mold of Yaya Toure. However, he has taken over from Modric as the new heartbeat of our team. In fact we have won every game he has started.

Without him we have locked slow and ponderous in midfield, lacking drive. There has been no link between defence and attack. With him we were much better, well for the first half an hour or so. Maybe his lack of match fitness explains the drop off in our play after this period.

Adebayor is suspended leaving us with just one available striker, Jermaine Defoe. Defoe is a great goalscorer as he proved against West Ham. However he is not so good when a team is under pressure and cannot get out of it’s own half, as Spurs were for long periods of the second half. You can’t knock long balls to him and he doesn’t hold the ball up. Don’t get me wrong, he’s a great player. We just need another option and at the moment all we have is Adebayor. I hope this gets addressed in January.

Bale played very well in this game, scoring and setting up a goal. It would be a little churlish to complain about him. However he does cause some defensive issues. He doesn’t provide much cover to our defence on the left, unusual for a former left back. This was particularly obvious a couple of weeks ago when we went down to 10 men against Arsenal. Walcott got a free run at the inexperienced Kyle Naughton. In this game it may not have been so clear but Suarez and Sterling got a lot of joy down our left side.

Since he arrived at the club Dawson has been one of the most popular figures at White Hart Lane. He is a no nonsense defender who always gives his all. So far he hasn’t had much of a role in AVB’s Tottenham sides and some have suggested he doesn’t fit Villas Boas’ tactics but he got his chance in this game. He played well, particularly in a challenging second half and was especially commanding in the air. Once we have Assou-Ekotto back I would play Dawson and Vertonghen in central defence. His aerial presence and Vertonghen’s skill on the ground could be a good combination.

In conclusion I thoroughly enjoyed the game, despite the freezing conditions. Another three points and things are looking up at the Lane.