Expected Goals is a derived statistic that estimates the number of goals a team would score on average from its opportunities. It has become so widespread it now features on Match of the Day.

To help in my analysis of games I have created a very simple Expected Goals model – see here if you want to know more details. Many people have built more sophisticated models but this should still be good enough to give us a useful analysis tool.

So what can Expected Goals tell us about last week’s Premier League matches?

The following graphs all show cumulative Expected Goals by minute of the game. The higher the number the better the team has performed up to that point. The steeper the gradient, the better the team is doing in that time period. Each graph shows the two teams in one match plotted against each other for comparison.

The final mark reached on 90 minutes gives an estimate of how many goals that team might have scored based on the chances they created. If they didn’t, it could be down to luck, poor/good finishing or a deficiency in the model.

Tottenham took a while to get going but it turned into a pretty routine win. They were on top even before the sending off at the start of the second half and this only increased as the match wore on. Newcastle stirred a little in the last ten minutes but it was too little too late.

How about the other Premier League contenders?

Liverpool were very rusty to begin with and Watford took a deserved lead. It looks like Klopp’s half-time team talk worked as Liverpool began to take control. They should have put the game to bed but a late Watford rally lead to an equaliser.

Chelsea are Spurs’ next opponents. The champions were overwhelmed in the first half by Burnley, partly because of the sending off of Gary Cahill on 14 minutes. A strong second half showing was almost enough to get something from the game; looking at the graph it seems they were maybe a little unfortunate not to.

Another high scoring see-saw game, but this time it went the way of the favourites. Leicester matched Arsenal for much of the match but tired near the end as the home team piled on the pressure. Late substitutions around 70 minutes, bringing on Giroud, Ramsey and Walcott, appear to have been decisive. 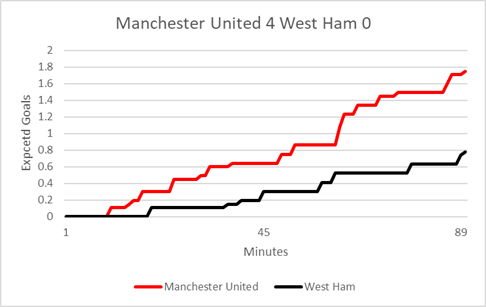 Manchester United had the most impressive start to the season of the title contenders. It looks a deserved win although maybe the scoreline flattered them slightly. 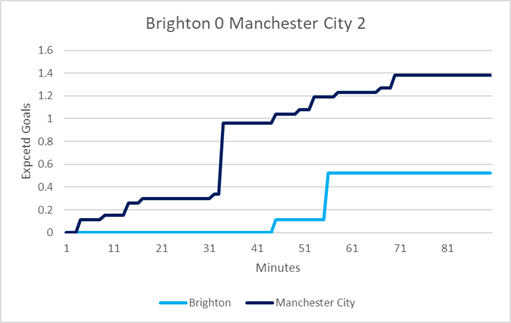 On their debut in the Premier League Brighton didn’t offer very much until the second half. After City scored their goals (71 and 75 minutes) both teams appear to have settled for the result. This match does demonstrate a flaw in the model. The second goal wasn’t from a City shot, it was an own goal and as such, is not present in the graph.

I will try to produce more expected goal graphs in the coming season and see what they can tell us.