It’s FA Cup week and there’s no Premier League, so I thought I’d take a statistical look at how the season’s taking shape. This is the first of two articles, in the second I will be trying to categorise teams’ style of play based on some basic metrics.

Let’s see how the statistics suggest each of the 20 teams is performing and how that matches their points total.

I’m going to use the crude but effective measure TSR (Total Shot Ratio), the percentage of shots a team takes in its matches. As described in previous posts, TSR is a good indicator of underlying performance. If you want to know more about it and why it a works, go to the excellent Statsbomb.com.

The dotted line shows the implied relationship between points and TSR (a linear regression). Above the line means a team has more points than expected, below fewer. 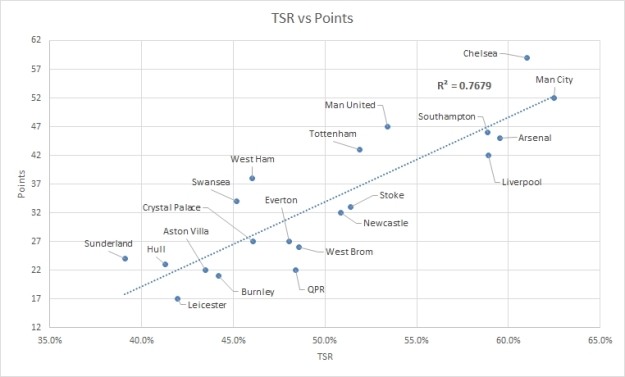 The first thing to note is that Chelsea and Manchester City have looked in a class of their own all season and the shot ratios emphasise this. Chelsea are outperforming the trend – maybe by some Mourinho trick – and it is this edge that sees them top the table.

Liverpool, Arsenal and Southampton are in a tight group just behind. Further evidence that the south coast side aren’t out of place in the race for the top four.

Manchester United and Tottenham are next but both have more points than you would expect based on their TSR. This corresponds with the general perception that these are two teams that have been finding their feet after the arrival of new managers with complicated systems.

Stoke and Newcastle are stuck together in mid-table mid-TSR mediocrity.

Everton and the newly Pulis inspired West Brom look unfortunate to be lower down the table, while Swansea and West Ham have been punching above their weight. Again, conclusions that make a lot of sense.

Crystal Palace look to be making their way clear of danger, but the rest of the group at the bottom look destined for a long hard fight to stay in the division, especially Sunderland, who are clearly rock bottom of the TSR table.

The one outlier down there in the relegation dogfight is QPR. With a solid 11th placed shot ratio, it looks like they might have the best chance of getting out of trouble.

Note: Come back tomorrow for part 2.

If you have any thoughts on what these statistics tell us let me know in the comments below.