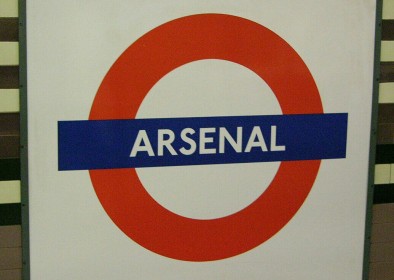 Woolwich, “the scum”, Arsenal – Spurs must face our biggest rivals this weekend in the third North London Derby of the season. March was always going to be a make or break month and so far it hasn’t gone well. A bad loss to Chelsea, a Sherwood interview meltdown and a catastrophic Europa League first leg have dampened spirits. With fourth place looking unlikely and needing at least a 3-0 result in Lisbon to maintain our European ambitions, beating Arsenal looks like the best we can hope for from the remainder of this frustrating season.

The other two derbies this season have come at the Emirates and both games have seen Arsenal emerge victorious; a 1-0 loss under AVB in the league and a 2-0 defeat under Sherwood in the FA Cup. That cup game saw the first indications that our manager might be a little out of his depth, as Tottenham were overrun in midfield and comprehensively outplayed.

Arsenal lie third in the table, a mere six points above Spurs but have a game in hand. They have had an up and down month, losing to Stoke and going out of the Champions League but trouncing Everton to reach the semi-final stage of the FA Cup. Their form in the league has been mediocre with two wins, two draws and two losses from their last six games.

Our rivals are a possession team, and sit fourth in the league in average possession and third in pass success. They are not very aggressive tacklers, having committed the second least fouls. They make lots of short passes, are quick on the counter attack and use through balls often, something we have been particularly vulnerable to (see Liverpool, Manchester City, Chelsea, Benfica).

Arsenal favour attacking down the right hand side – our left – so it would be a mistake to play Eriksen and Naughton there, as we did against Benfica. Eriksen is not a natural winger and does not provide defensive cover, while Naughton is out of position on the left. The combination leaves us very vulnerable on that side.

One piece of good news for Tottenham, is that several of Arsenal’s most creative midfield players are missing through injury. Three of their best performers in the first half of the season, Ramsey, Ozil and Walcott, will all miss this game. In Ozil’s case, Arsenal fans may be breathing a sigh of relief as the £40 million pound summer signing’s form has nosedived. Wilshere is also out with a foot injury picked up on England duty.

The bad news is, in Rosicky, Cazorla, Arteta and Podolski, Arsenal have able deputies. Flamini may also feature to add steel to their midfield.

Spurs captain, Michael Dawson, is out with a hamstring injury, and Kyle Walker is a doubt. A fragile Younus Kaboul may have to play his third game in nine days.

Sherwood has hopefully learned from the cup game against the gunners, and should play five in midfield. Many of our recent problems have stemmed from players playing out of position, so I would pick a team and system that suits the available personnel. The defence will need protection from Arsenal’s quick passing and counter attacks, so I would play Sandro as a defensive shield.

In midweek we strongly lacked creativity. To address this I would play Eriksen in the number 10 role, just off a central striker. We need our most creative force where he can do the most damage, not drifting on the left. I would also play two conventional wingers, both to get at Arsenal in wide areas, and to provide cover for our full backs – especially on the left. 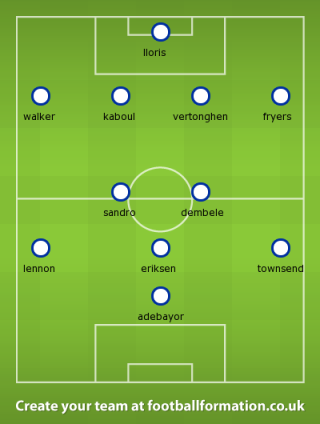 Do you agree? Please add your thoughts in the comments section below.

1 thought on “Spurs Arsenal Preview – Can Spurs salvage some pride against bitter rivals?”