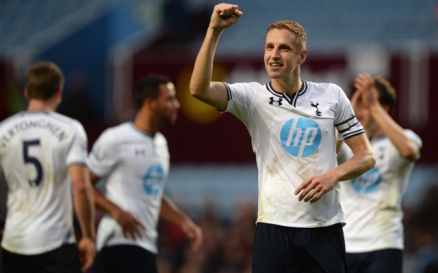 Without Eriksen we lack a set piece specialist. His corners and free kicks have been a big plus point this year. When he’s not on the pitch we haven’t got many alternatives. On Sunday, against Cardiff, several set pieces were taken by Kyle Naughton. He actually did quite well, Michael Dawson glanced a header just wide from one of the his corners. However, is a second choice defender really the best we can do?

Naughton has received a lot of flack this year, much of it fair. He doesn’t seem quite good enough for the Premier League. However, his really poor performances have come when forced to fill in at left back – not his natural position. The 3-0 loss to West Ham and the 5-0 loss to Liverpool are good examples. He also came on after Danny Rose was sent off in the 5-1 loss to Manchester City, again at left back. Brought on when your team’s down to 10 men, on the wrong side, against the best attacking team in the division – not a great position to be put in.

In the Cardiff game he got a rare opportunity on the right because of the injury to Kyle Walker. I thought he had a good game.

Another player who has come in for some stick recently is Michael Dawson, who captained the team on Sunday. I’ve been critical of his form this season, as have many Spurs fans. He always plays his heart out and he’s great in the air, but when faced with pace and quick passing he looks too slow.

In this match he put in a fantastic performance. He made some key clearances and interceptions, but where he really came into his own was with his head. Cardiff threw crosses, corners and free kicks into box, especially when they were desperately searching for an equaliser as time ran out. According to the statistics from the game, Dawson won 11 aerial duals, the rest of the team put together only won 15.

It could be argued that Cardiff’s style played into his hands – lots of crosses and balls hit into the box. Nevertheless it was a captain’s performance. He even had three attempts at goal, including a very ambitious volley.

Mousa Dembele is a brilliant yet frustrating player. He’s strong on the ball and beats players regularly with a languid drop of the shoulder. He is talented enough to dominate a game. The problem is, he slows down midfield.

Many times Spurs break and, rather than play the simple, quick pass, he takes three or four touches, looks around, beats a player…always overcomplicating. The winner against Cardiff demonstrates it’s much easier to find space when hitting a team quickly after a turnover of possession, before their defence has had time to reorganise. The one game this season where we’ve consistently done that was against Newcastle, where Capoue would win the ball and start a move with a quick, simple pass. Paulinho and Bentaleb played in front of the Frenchman in the centre, while Dembele was relegated to the right hand side. Is this a coincidence?

As an aside, there was an interesting result in one of the other Europa League games last week. Frank de Boer is currently manager of Ajax and, having won three consecutive Dutch league titles, is one the rising stars of European football management. He has been linked with a move to Spurs, among other clubs. His Ajax team were suprisingly knocked out 6-1 by Red Bull Salzburg of Austria, having been humiliated 0-3 at home in the first leg.

1 thought on “Set piece specialist, captain fantastic and Red Bull really does give you wings”