A narrow win for Spurs took them within four points of fourth place, and perhaps more significantly, within six points of Arsenal. Manchester City, currently in fourth, have two games in hand, so Arsenal and Liverpool are our target. Both are six points ahead of Tottenham and have a vastly better goal difference.  After the results this weekend, the defeat to Norwich looks even more costly. 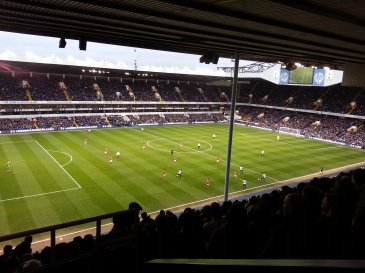 I was at White Hart Lane for the game, shamefully my first visit in the Sherwood era – my previous visit was AVB’s final game against Liverpool. This time I took my dad, who had not been for several years. He grew up watching Spurs in the 50’s and 60’s. His heroes were Greaves, White, Blanchflower and Mackay. I was worried the current squad might not quite measure up.

Before the game there was a shock with the team news – no Christian Eriksen. Yesterday, I wrote a post about his match winning performance against Dnipro and questioned whether Sherwood could possibly leave him on the bench again. It was all rendered academic as a back problem ruled him out. Perhaps this explains his other recent omissions.

As usual we started slowly, in fact we never really got going. We had lots of possession but were again found wanting in the final third. Frustratingly, there still seems to be the lack of movement and fluidity that has plagued us all season, and an unwillingness to get bodies forward.

Cardiff had set up to defend and hit us on the break, a strategy that has become a template for visiting teams at White Hart Lane. They played a 5-3-2 with three centre backs, presumably in anticipation of Spurs playing two up front. This way their centre backs outnumbered our strikers, always leaving a spare man to mop up. The two fullbacks then had licence to get forward quickly when countering.

Craig Bellamy was preferred to Kenwyne Jones, probably with his counter attacking ability in mind. At 34 he doesn’t seem to have lost much pace and he used this to good effect causing us problems early on. The game had the feeling of many of our recent frustrating first half performances until Roberto Soldado broke the deadlock on 28 minutes.

Ironically, the goal came from a counter attack by Spurs. Cardiff swung the ball into the box from an attacking freekick. We cleared the danger and Townsend broke through the middle, feeding Adebayor on the left. He threaded the ball through to Soldado arriving in the centre of the penalty area. The Spaniard took one touch, then flicked the ball with the outside of his right boot past the keeper and into the corner of the Cardiff goal. This was the Soldado we had been waiting for, the one we paid £28 million for in the summer.

White Hart Lane exploded, the pent up frustration of the first half an hour, and of Soldado’s difficult six months at Tottenham, released. The cheers were long and loud, the crowd chanting the strikers name. Everyone let out a long sigh of relief, not least Soldado himself.

Curiously he is now our top scorer in all competitions this season, having moved one clear of Jermaine Defoe. However, until now Soldado’s goals have come mainly in the Europa League group stages or from the penalty spot. This was different and far more significant; a winning goal from open play in a Premier League game.

The goal seemed to affect us and we lost concentration, leading to a brief spell of Cardiff pressure. The highpoint came when Tottenham old boy Steven Caulker headed against the bar from a corner. After this brief flurry of action, the game settled into a scrappy affair with little quality or goal mouth action. The crowd were surprisingly mute and the ground had a strangely flat atmosphere.

At half time, proceedings took a surreal turn as “Man Versus Food” star Adam Richman turned up on the pitch, talking about Greaves and Blanchflower. Apparently, the New York raised television personality is a Tottenham fan, and from his brief interview on the pitch, seems to know quite a lot about our history.

Just after the restart Lennon could have had a penalty after he was tripped on the edge of the box by John. The referee gave a freekick just outside, with replays suggesting that this was, by a matter of inches, the correct decision. Aaron had a good game after some poor showings of late, full of the pace and trickery that has been absent. One example came early on as he got to the byeline to set up a difficult chance for Soldado.

As the game neared its finish, Harry Kane was brought on as a late substitute. He only ever seems to get used as a way to waste time near the end of games. A late Tottenham break, as Cardiff pushed for an equaliser, saw his shot saved by Marshall when he should have scored. The Welsh side threw everything at us as time expired, even their goalkeeper came forward for a late corner. There were a few wobbles but our defence held firm.

So not a classic, but nevertheless a precious three points gained. Considering our efforts on Thursday night, this was understandable and it’s good to get a win after a Europa League match. In addition, Soldado has finally got some confidence. All in all a profitable afternoon. Next home game I’m back at the Lane for the north London derby.

If you have any thoughts on this, please leave your comments below.