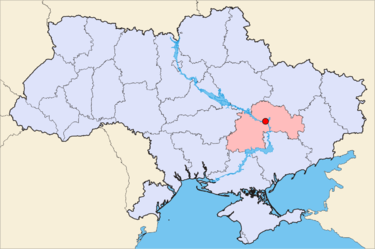 Dnipropetrovsk on a map of the Ukraine

After interminable group matches, we finally reach the knockout stages in this year’s Europa League. Spurs face a long away trip to the Ukraine in the round of 32 where they face Dnipro Dnipropetrovsk, who came fourth in last season’s Ukrainian league. The prize for the winner is a match against PAOK or Benfica in the next round.

The Ukranians don’t have much of a pedigree in European competition but made it as far as this round in last season’s competition. They were knocked out by Basel who went on to conquer Spurs in the quarter finals. This season Dnipro reached the knockout stages by finishing second in their group to Fiorentina. They lost to the Italians twice, but won all four of their other games, beating Paços de Ferreira of Portugal and Pandurii Târgu Jiu of Romania twice each.

Dnipro currently lie fourth in their domestic league but have not played a competitive game since December as the league has a three month winter break. It is difficult to say whether the lack of match practice will hamper them, or the extra rest make them a more dangerous proposition. Ukraine can be fairly cold at this time of the year but tomorrow’s forecast in Dnipropetrovsk is for temperatures of 8C.

Dnipro are managed by former Spurs coach Juande Ramos. The Spaniard has been at the Ukranian side for over three years and is nothing if not consistent, having taken his side to three consecutive fourth placed finishes. This is a reasonable return considering the domination of the league by Shakhtar Donetsk and Dynamo Kiev. The two giants of Ukrainian football have have won every title since the inception of the league in 1992, except the first, and taken all but three of the second places.

Dnipro’s danger man is winger Yevhen Konoplyanka, who Spurs supporters may remember as a purported Tottenham target in the last transfer window. Liverpool ended up just missing out on his signature as the window closed. It’s a shame the deal didn’t go through, as he will be a major threat to Tottenham in the game on Thursday night. In the last World Cup qualifying campaign he caused England major problems, scoring a fantastic long range goal at Wembley in a 1-1 draw (which I was at the ground to see).

Lloris, Kaboul, Lennon, Walker, Defoe, and Adebayor have all not traveled as Sherwood looks to rest players. In addition, Sandro, Lamela, and Chiriches are all still out through injury, so the match will probably see playing time for some of the fringe squad members and youngsters.

Does this mean Sherwood is not taking the competition seriously? Well, one of the reasons Tottenham replaced Gareth Bale with so many new recruits was to build a squad capable of challenging on several fronts and it will be put to the test here. Players who have disappointed this term, such as Soldado and Chadli, will get an opportunity to impress. With respect to the opposition, Spurs’ squad players should be good enough to get something from this game.

Realistically this is the only trophy still available to Spurs this season and looking at the teams left in, we have a decent chance. On Betfair we are third favourites to win the competition at 9.8, behind Italian sides Juventus and Napoli. Is a trophy or fourth place worth more? It’s hard to say, but if we don’t put our efforts in to both we could end up with neither.

Article: How to fix the Europa League

If you have any comments on the game, please leave them in the box below.